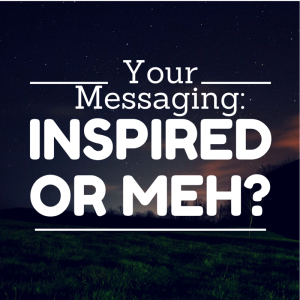 No one will disagree that Steve Jobs is a brilliant communicator and marketer.

It takes living a brand at the cellular level to create the kind of following … and the kind of business …  that Apple commands and is. His focus on simplicity, clarity and beauty is demonstrated in every new product introduced.

The following excerpt from an article in the October 11, 2010 issue of Bloomberg Businessweek titled “Communication Breakdown” is a perfect example of why Apple, and Steve Jobs, rule at producing messaging that’s inspired.

“When Apple Chief Executive Steve Jobs unveiled the iPad last January, he took the stage … and held his new tablet computer like a precious jewel. The device, he told the crowd, was a ‘truly magical and revolutionary product,’ something ‘extraordinary’ and ‘unbelievably great.'”

Then the competition … Blackberry … discusses their answer to the iPad. The difference in message is incredible.

“Jim Balsillie, the co-CEO of Research in Motion … said: ‘ There’s tremendous turbulence in the ecosystem, of course, in mobility. And that’s sort of an obvious thing, but also there’s tremendous architectural contention at play. … We’ve taken two fundamentally different approaches in their causalness. It’s a causal difference, not just nuance. It’s not just a causal direction that I’m going to really articulate here–and feel free to go as deep as you want–it’s really as fundamental as causalness.'”

Wow, I’m really inspired. And now I really want a PlayBook, don’t you?