They’ve built their brand where it counts. Visibility from the road, fast drive-through with energetic and happy service, and the familiar–and recognizable blue lid. Not just a lid though, a lid with a message.

Although I confess I don’t think their logo design is fabulous (must be the designer in me) … this Oregon company has every other element that makes a brand work. And work so well. They have mastered the nuances of their business, and connected with customers on so many levels.

If you’re not from the Northwest where often there are two Starbucks in one block, and a drive-up coffee kiosk in every parking lot, you may not relate to this story as much as we Oregonians do. 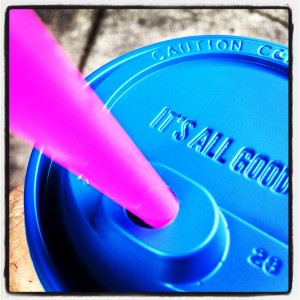 When you think about to-go coffee at a drive-thru, what do you think of? What most symbolizes that coffee-on-the-go, carry-it-around-with-me, take-it-to-a-meeting experience?

The cup. The to-go cup you see everywhere …  in car cup holders, meetings, in hand while strolling around town. They’re filling up my office wastebasket!

Because no matter how great the coffee is, or whether you’ve chosen a vanilla latte or a triple shot skinny tall mocha, your hand is on that cup while you’re enjoying your coffee. It’s the ultimate point of choice. In hand.

Of course, you wouldn’t keep buying new cups if the coffee wasn’t good, too.

From their website: Every cup of Dutch Bros. coffee is handcrafted — roasted by hand in the Pacific Northwest, blended by hand and then ground and pulled by hand, ristretto-style.

They use color so well 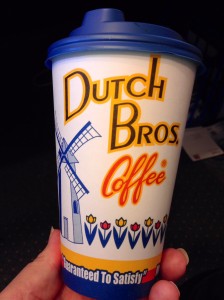 Dutch Bros. has focused their attention on that all-important cup. That final point of choice, the brand in hand.

To separate their brand (and their cup) from any other to-go coffee cup, they’ve chosen blue accented with bright yellow. Apple used this visual cue when they made their earbuds/cords white for the first iPods, then showcased them in commercials. Everyone else used black.

The bright blue lid tags Dutch Bros. coffee not only at their locations, but in the hands of fans. Yet that blue lid is not just any lid. It’s a lid with a message. A different message each time you get your cup of coffee. Brilliant. Take the experience and the personality with you, not just the coffee.

The cup is also the shape and design for signs inviting you to leave the highway and stop for a quick cup to go. The cup has become the logo, the symbol, the icon used on their app and in signing. Even the funky tulip and windmill artwork are endearing!

It’s about local branding (although the company has grown beyond Oregon). But they feel local, look and act local. And it’s local branding done right.

Having started from humble beginnings, as a single espresso pushcart in the small town of Grants Pass, Ore., the company now has nearly 200 locations in Oregon, California, Washington, Idaho, Nevada, Colorado and Arizona.

Dutch Bros. has built the ongoing drive-thru coffee experience (the context for the brand) at multiple levels–great coffee (and a few other choices), super fast service, and a big, genuine smile from people who get to know you when you’re a regular. 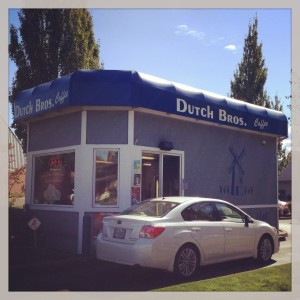 Frankly, I think Dutch Bros. coffee is better than Starbucks. And it also costs less. Although the price makes me feel a tiny bit virtuous, it’s not what keeps me coming back. It’s also the speed.

When Dutch Bros. designed their system, they made sure their people and equipment can deliver lots and lots of shots fast. So much faster than Starbucks or any other drive-thru.

What else? Free stickers.

I’ve seen many self-professed DB addicts driving around with witty and fun white vinyl stickers on their cars or trucks.

Who wouldn’t want to label themselves ‘Dutch Princess’ or ‘Dutch Mafia.’ Or show off ‘Powered by Dutch Bros.’ on their back window? You can’t get that kind of visibility with paid advertising!

But the best part? 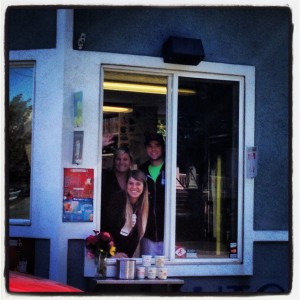 They know how to hire. Everyone is genuine, lively and fun to talk to. They quickly get to know their regulars … when they see you waiting in line, your preferred coffee is ready when you reach the window.

It makes me feel so special! (four-shot medium non-fat latte with half a pack of Splenda, please)

No matter which Dutch Bros. site I’ve been to, their people are rockin’ out to music, chattering away happily and able to bring a smile to your face when you drive off with your deep-roasted, toasty-warm, super-tasty, freshly-brewed coffee. 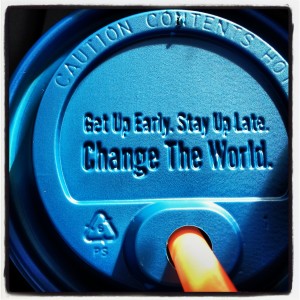 I have heard those who bought a franchise even just a few years ago are doing VERY well. I’ve seen long lines that often snake into the road and can block traffic.

And I know when I’m looking for coffee to go, I look for Dutch Bros. first. My daughter moved to Arizona years ago, and is now THRILLED that Dutch Bros. has arrived there.

Despite the national recognition of Starbucks, and their stores everywhere (and yes, I drink Starbucks if Dutch Bros. isn’t available), I think this Oregon company has changed the coffee world … for the better. More real, more local, more fun.

A brand is more than a logo

A brand is context and experience. And local branding puts a company like Dutch Bros. in the heart of the community, creating visually distinctive icons, delighting customers young and old, and creating fans who share the story with the cool stickers on their car. Branding doesn’t have to be hard or complicated. Often the simplest ideas work the best. The cup. The color. The coffee. The people. Free stickers.

We offer more thoughts on branding:

Want to talk further about branding? Email me here. I would love to chat. 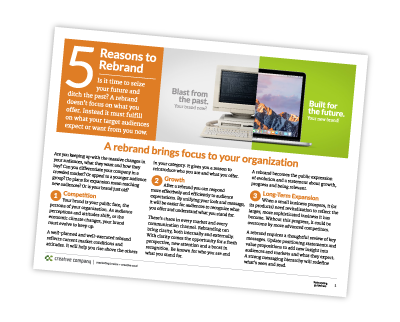 Time to rebrand? Use our guidelines to decide.

Get my rebrand worksheet